Student Voices: Getting a Green Card for My Client in the Immigration Clinic 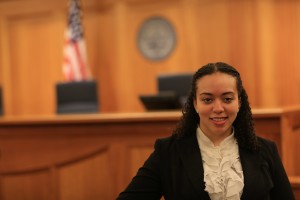 Our client had only a few forms of relief in the immigration context. Fortunately, he is married to a U.S. citizen and they have a child born in America. This allowed us to request a Green Card and his release.

Working on this client’s case was extremely challenging from a legal standpoint. He had a troublesome childhood, including a criminal history. (Lack of family ties and support when he was younger made it difficult for him to control his emotions.) In Immigration Court, criminal history is a difficult hurdle to overcome, depending on the crime committed. An immigration judge often will deport immigrants who have committed serious crimes, such as drunken driving or aggravated assault.

Our client was detained in jail for about six months before his trial. We had to prove that allowing my client to remain in the United States with his family outweighed negative factors such as his past criminal history. During the trial, we showed that his wife and child are U.S. citizens; that he legally entered the United States; that he had a stable employment history; and that he had performed community service. During the trial, we called my client to testify about his childhood, what happened with the criminal cases, his employment history and his American family. We also called two of his mentors as witnesses to testify that he is a good kid, is loved, employed, and that his criminal history does not paint the true picture.

The immigration judge agreed with us and granted the Green Card. My client was ordered released from detention and returned home to his family.

Visiting my client in detention, representing him in Immigration Court, and being a part of his release from jail was such a rewarding experience.

Tiffany Andrade, JD’15, is an associate at Chin & Curtis in Boston. While at Suffolk Law, Tiffany interned with immigration legal aid group the PAIR Project in Boston.