Student Voices: I Decided to Become a Lawyer When I was 4 in Nigeria 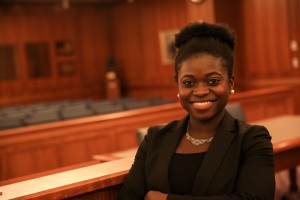 I was born in Ibadan, Nigeria and lived there until I was 11 years old. I decided that I wanted to be a lawyer sometime around my fourth birthday.

I first discovered what a lawyer did through my grandmother who owned several residential and commercial properties in our home state. I would listen to conversations between her and her lawyer about leasing agreements with her tenants. He listened and gave her advice, sometimes legal and sometimes more personal. My grandmother’s relationship with her lawyer was unique because she did not speak English and was illiterate. He worked diligently to explain the law and her options, from which she made many important decisions for her real estate business.

I also often heard my father lamenting to his lawyer about issues he was having with trespassers on his property in rural parts of the country. Again, his lawyer listened and helped with advice. He gave legal counsel but so much more. My father’s lawyer visited our home often. We saw him in town and at local events. To my little ears, lawyers were confidants and counselors. It was fascinating to me.

When I moved to the United States, I realized what pursuing a law degree entailed. In this country, lawyers are counselors and confidants, but also prosecutors and defenders, businessmen and financiers. I realized that lawyers play an indispensable role in society and are often tasked with helping solve complex and challenging issues.  Although the roles of lawyers in the United States seemed daunting at first, I quickly realized that I still wanted to join the profession.

Now that I am in law school, being a lawyer means serving as an advocate for one’s clients whether they are large institutions or indigent defendants. I plan to practice employment law. But I also hope to be the confidant and the counselor.

Debbie Aderinto, JD’16, is an associate at Jackson Lewis in Philadelphia. She also has an MBA from the Fox School of Business at Temple University. While at Suffolk Law, she interned and clerked at law firms in Philadelphia, Rochester, NY, and Boston.