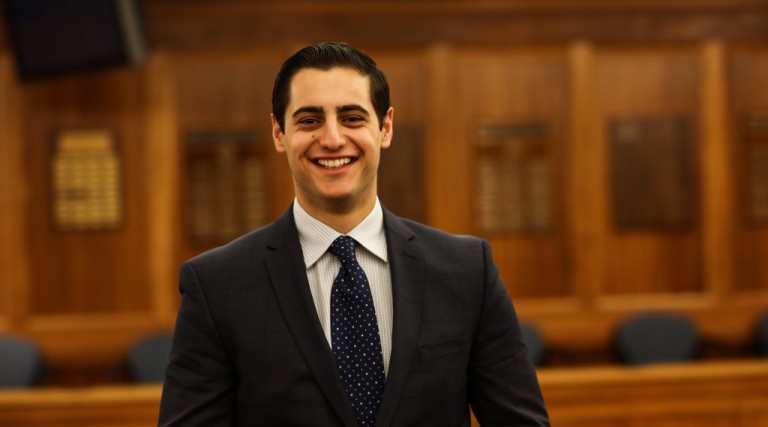 Within two hours of being in Cuba, I sat down for dinner with our group of Suffolk Law students at the local neighborhood restaurant where our host homes were located. A Cuban local raised his glass to cheer us, proclaiming “The Americans are coming!”

And, that is about what it felt like when I arrived in Havana for a January intercession law school class. The island was hosting many Americans—all similarly curious about what Cuba’s new openness would mean.

For my part, I was selected for the joint Suffolk Law-University of Havana Law School course to learn about the Cuban legal system and socioeconomic infrastructure. I want to prepare to serve clients and investors interested in Cuba when trade relations formally open between our nations.

The week-long course was centered around a series of lectures by distinguished law professors at the University of Havana Law School. We also visited the International Commercial Court of Arbitration and learned about legal remedies available to those engaged in commerce and investment activities in Cuba.

A highlight of the trip for me was spending a day at a Cuban law firm, which housed about 25 attorneys. I met the attorney who represented Alan Gross, an American sentenced to 15 years in prison for bringing iPods, Blackberry smartphones, MacBooks and other electronic equipment into Cuba. He was later released in exchange for five Cubans held by the United States on espionage charges.

To end our academic excursion, we traveled to a countryside village outside of Havana known as Vinales, where we rode on horseback through the scenic tobacco, coffee and sugar cane fields. As part of the cultural experience, we ate incredibly fresh farm food including pork, rice, beans, fried and boiled vianda roots, and a refreshing mojito to top it all off.

Michael Vigorito, JD’16, is partner at his own law firm in Boston.