Why I Joined an Affinity Group in Law School 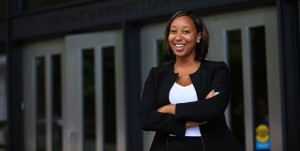 During the fall of my first year at Suffolk Law, I attended my first meeting of the Black Law Students Association (BLSA). It ended up being one of the best decisions of my law school career. BLSA was where I first met students outside my 1L section. BLSA was how I met alumni and mentors who helped me figure out life after law school. And BLSA was how I gave back, as a mentor and leader helping promote black excellence and success beyond the classroom.

As a graduate of an HBCU, being a leader in an affinity group allowed me to grow in my efforts to promote black excellence, advocate for others, and be a part of the progression of diversity and inclusion here at Suffolk.

Cherina Clark JD/MBA’17 is the Director of Student Engagement and Inclusion at Suffolk Law. Cherina graduated from Hampton University (an HBCU) and earned a dual JD/MBA from Suffolk Law and Suffolk’s Sawyer Business School. At Suffolk, she was the President of the Black Law Students Association for two years in a row.