Student Voices: My Summer Internship with the Army JAG Corps 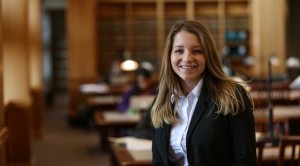 The summer after my second year of law school I interned with the Army JAG Corps in Fort Bliss, Texas. I had no experience with the military but wanted a different type of experience.

Some of the highlights:

Each day began at 0630 with PT –yes, physical training! Often consisting of a fair mix of cardio and running, as well as strength and agility, PT was a great challenge, and a wonderful start to every day.

Work call began at 0900, and I’d get right to that day’s assignments. Army Judge Advocates are both soldiers and lawyers, and work in multiple legal areas throughout their career. Throughout my time at Fort Bliss, I was able to rotate through the Administrative Law, Military Justice, Legal Assistance, and Operational Law sections.

While in administrative law, I was able to draft an information paper on what can be released to the media. I also worked on a line of duty determination case, in which we had to determine if a soldier’s injury is entitled to military benefits.

Military justice is the military’s version of prosecution. While working in military justice, I drafted prosecution memos (why we should prosecute someone) and non-prosecution memos (why we shouldn’t prosecute).  The decision not to prosecute a case is a tough and challenging one. I liked that I was given the independence in these cases to make a decision and to articulate my reasoning to a commander through a memorandum. These memos went not only to my boss but up the chain of command to our SJA (Head Judge Advocate) and to other commanders throughout Fort Bliss. I also observed multiple courts-martial hearings and administrative separation hearings.

Legal assistance involved working closely with service members and their families regarding a wide range of legal issues including landlord/tenant disputes, consumer issues, drafting wills, and powers of attorney for deploying soldiers.

Operational law addresses the laws of war, and while working there, I analyzed tactical orders for an installation wide field exercise, as well as the Rules of Engagement for it.

I even got to experience life as a soldier and spent a day in the field learning about Air Defense Artillery, including patriot and THAAD missiles. Air Defense Artillery is an Army unit that takes down missiles or similar air attacks. On a visit to the training area, I was taught about the systems that soldiers monitor to watch for threats, and I even observed some soldiers practice reloading a patriot missile. I knew nothing about this stuff before I spent the day there!

Kristen (O’Keeffe) Dorfman, JD’17, is currently a Judge Advocate General in West Point, NY. During her time at Suffolk Law she was a member of Suffolk Law’s National Trial Team and Editor-in-Chief of the Journal of Health and Biomedical Law.