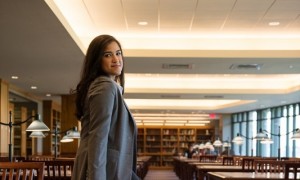 During my third year of law school, I was a part of a team of clinic students that successfully persuaded three federal judges in the First Circuit Court of Appeals to side with us and release a 41-year-old Jamaican citizen who was about to be deported. This decision overturned the highest immigration board in the country, and most importantly, became law.

Anthony Whyte is a U.S. permanent resident and has been living here since he was 6 years old. In 1999, he was convicted of a Connecticut third-degree simple assault, a misdemeanor offense most commonly charged in cases with minor injuries. In 2012, he was detained and facing imminent deportation due to the 1999 conviction. That’s when Suffolk Law’s Immigration Clinic got involved.

I joined the Immigration Clinic during my third year at Suffolk Law School. By that time, my clinic colleagues and I were filing our client’s last chance for relief from immediate removal from the United States. The Board of Immigration Appeals had decided our client should be deported. Only the First Circuit Court of Appeals could overturn the decision.

Our clinic had eight third-year students, who were paired off and each assigned to research and write an argument section for the federal appellate brief. My partner and I were assigned what turned out to be the pivotal argument in the appeal: whether a third-degree assault charged at the state level triggered deportation under federal law.

Even though I worked as a paralegal at an immigration law firm for four years, I was nervous and really scared about how to tackle this issue. I cannot count how many cases I read and how many highlighters went dry. But the legal research was the easy part. The hard part was extracting rules from case law, determining which cases were on point, and most importantly, keeping up with how the courts were interpreting the law. The most challenging aspect was applying the law to the facts of our client’s case and having the confidence in ourselves to tackle this colossal issue.

Our argument came down to comparing the language of the state criminal law to determine whether it covers the same conduct that is punishable under the federal provision. During my analysis, I looked at each statute side by side to determine whether the elements of one matched the other. Particularly, the Connecticut offense required a person to act “with intent to cause ‘physical injury’” whereas the federal offense required “the use, attempted use, or threatened use of ‘physical force.” My argument was that when looking at the plain language of the Connecticut statute, it does not have as an element, or even suggest, that the perpetrator needs to use physical force or even intend physical force to cause this injury.

The First Circuit agreed, finding that the use of violent force must be an explicit element found within the plain text of the state statute, jury instructions, or in case law.

Anthony Whyte was released from immigration custody just in time to celebrate the holidays and ring in the New Year with his family, including six children, for the first time in nearly four years.